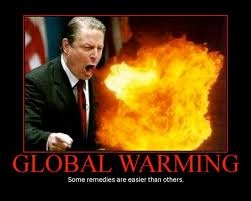 Despite the growing worldwide recognition that global warming—now called climate change—is a hoax and that the Earth has been in a cooling cycle going on seventeen years, those most responsible for it continue to put forth baseless “science” about it.

The hoax has its base in the United Nations, which is home to the Intergovernmental Panel on Climate Change (IPCC) and got its start with the Kyoto Protocol in 1997 that went into force in 2005. It limits “greenhouse gas” emissions, primarily carbon dioxide (CO2). It purports that the gases are warming the Earth and many nations signed on to reduce them. The U.S. did not and in 2011 Canada withdrew from it. Europe is suffering economically from the billions it invested in “alternative energy” sources, wind and solar power.

Five years ago, emails between a group of the United Kingdom’s University of East Anglia scientists and others who were generating computer models that “proved” global warming were revealed. It was quickly dubbed “climategate” for the way the emails demonstrated the manipulation of data claiming that global warming was real. They had good reason to be worried, given the natural cooling cycle the Earth has entered, but of even greater concern was the potential loss of enormous amounts of money they were receiving for their deception.

To date, not one of theirs and other computer models “proving” global warming have been accurate.

On Wednesday, March 10, The Wall Street Journal published an article, “Scientists Say Four New Gases Threaten the Ozone.”  It reported on the latest effort of “scientists” at the United Kingdom’s University of East Anglia and it is no coincidence that the university was the center for the original IPCC data created to introduce and maintain the global warming hoax.

“Traces of four previously undetected man-made gases have been discovered in the atmosphere, where they are endangering Earth’s protective ozone layer, a team of scientists from six countries reported Sunday.
”
Trace gases are those that represent less than 1% in the Earth’s atmosphere. CO2, for example, represents a meager 0.038% of the atmosphere and represents no impact whatever on the Earth’s climate. It is, however, vital to all life on Earth as it is the “food” for all of its vegetation.

“The gases are of the sort that are banned or being phased out under a global treaty to safeguard the high altitude blanket of ozone that protects the planet from dangerous ultraviolet radiation, experts said.” These “experts” failed to mention that everywhere above the Earth’s active volcanoes the ozone is naturally affected by their massive natural discharge of various gases. The oceans routinely absorb and discharge CO2 to maintain a balance. The bans included the gas used primarily in air conditioners and for refrigeration. It has since been replaced.

Another gas that was banned is a byproduct of chemicals called pyrethroids that “are often used in household insecticides.” Banning insecticides is a great way of reducing the Earth’s population as insects spread diseases and destroy property. Ironically, termites produce massive amounts of carbon dioxide.

The means used to detect the gases included comparing “the atmosphere today to old air trapped in annual layers of Greenland snow” and they also studied “air collected by high altitude research aircraft and by sensors aboard routine passenger jet flights around the world.” Not mentioned is the fact that the Earth has had higher amounts of CO2 in earlier times which posed no threat to it, so a few trace gases hardly represent a “threat.”

This kind of questionable “science” was practiced by one of the most well-known of the East Anglia scientists, an American scientist named Michael Mann, who used tree ring data to prove a massive, sudden increase in CO2 in his “hockey stick” graph that has since been debunked by skeptical scientists.

Mann has brought a libel law suit against columnist Mark Steyn, the National Review and the Competitive Enterprise Institute, charging defamation. Such suits cost a lot of money and Robert Tracinski, writing in Real Clear Politics in February noted that “it’s interesting that no one asks who is going to go bankrupt funding Mann’s lawsuit. Who is insuring Mann against this loss?”
Tracinski pointed out that “It is libel to maliciously fabricate facts about someone” but that it is “legal for me, for example, to say that Michael Mann is a liar, if I don’t believe his erroneous scientific conclusions are the product of honest error. It is also legal for me to say that he is a coward and a liar, for hiding behind libel laws in an attempt to suppress criticism.” The East Anglia emails revealed that they were doing whatever they could to suppress the publication of studies that disputed global warming in various science journals.

The objective of the announcement is the same as the creation of the entire global warming hoax. It provides the basis for the transfer of funds between developed and undeveloped nations and would grant greater power to the United Nations to reduce the world’s manufacturing base while endangering and controlling the lives of everyone on Earth.

Is the latest “research” a lie? The data it cites has some basis in fact, but those facts are an excuse, like those cited about greenhouse gases, to frighten nations into wasting billions on climate threats that do not exist. The real threats remain climate events over which mankind never has and never will have any control.
http://canadafreepress.com/index.php/article/61746?utm_source=CFP+Mailout&utm_campaign=8ad939fd0f-Call_to_Champions&utm_medium=email&utm_term=0_d8f503f036-8ad939fd0f-297703129

Basketball Trainer & Founder of Thrive 3 Basketball, Mike Lee. Dose E.S.P.N, Want To Remove This To He Might Be Robert E. Lee Too?

Trees affect our climate, and therefore our weather, in three primary ways: they lower temperatures, reduce energy usage and reduce or remove air pollutants. Each part of the tree contributes to climate control, from leaves to roots.


Leaves help turn down the thermostat. They cool the air through a process called evapotranspiration. Evapotranspiration is the combination of two simultaneous processes: evaporation and transpiration, both of which release moisture into the air. During evaporation, water is converted from liquid to vapor and evaporates from soil, lakes, rivers and even pavement. During transpiration, water that was drawn up through the soil by the roots evaporates from the leaves. It may seem like an invisible process to our eyes, but a large oak tree is capable of transpiring 40,000 gallons of water into the atmosphere during one year [source: USGS].

Under the RCP 4.5 scenar…
Read more