A U.S. study is under way to evaluate several possible ways to limit climate change including solar radiation management and carbon dioxide removal.
The study will primarily be an analysis of peer-reviewed literature, and will not involve any substantial new research, experimentation, or development of new geoengineering technology, spokeswoman Lauren Rugani of the National Academy of Sciences said.
"The project's main goal is to provide a technical evaluation of proposed geoengineering techniques such as carbon dioxide removal and solar radiation management, to determine what we know and don't know about their physical capabilities, technical feasibilities, known risks, and intended or unintended consequences," Rugani said.
The evaluation would include general comments on how using such technology may impact the environment, economy and national security. The study committee includes experts in oceanography, earth sciences, environmental sciences, remote sensing, global ecology, marine chemistry and geochemistry, public policy, history of science, atmospheric and climate science and national security, Rugani said. 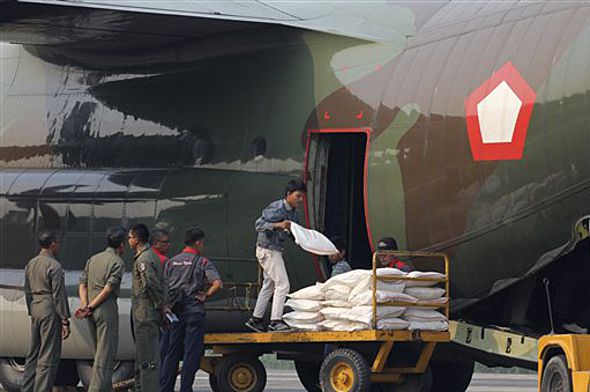 Workers load sacks of salt that will be used for cloud seeding to induce rain to battle forest fire into an Indonesian Air Force cargo plane at Roesmin Nurjadin airbase in Pekanbaru, Riau province, Saturday, June 22, 2013. Indonesia has dispatched planes and helicopters to battle raging fires blamed for hazardous levels of smoky haze in neighboring Singapore and Malaysia. (AP Photo/Rony Muharrman)
Most of the proposed geoengineering techniques for solar radiation management and carbon dioxide removal being discussed have global implications and are generally discussed in a global context, Rugani said.
"The study may discuss what is known about regional effects from various proposed techniques, but that will depend what peer-reviewed literature is available on those effects," she said.
The project is supported by the Academy, the U.S. intelligence community, the National Oceanic and Atmospheric Administration and NASA.
Changing the Weather
Attempts to change the weather have taken on various forms for about 70 years.
Agencies have used cloud seeding to bring rain and snow to parched areas of the western United States. The U.S. government tried to research and modify hurricanes from the early 1960s to the mid-80s, an effort that was unsuccessful.
Indonesia used cloud seeding in June to help douse forest fires. The Chinese government used its weather modification branch to work on a rain-free Beijing Olympics in 2008.
RELATED:
Frequency of Storms in Atlantic to Surge
Raging Southern California Wildfire Threatens Life, Property
2012 Broke Climate Records, New Report Says
So what's next for weather modification?
"In its report, the committee may briefly discuss weather modification as a historical example and draw on 'lessons learned,'" Rugani said.
Weather modification is the process of modifying the weather to enhance rainfall and/or suppress hail with the use of glaciogenic (silver iodide) and/or hygroscopic (calcium chloride) material, Project Meteorologist Jonathan Jennings of the West Texas Weather Modification Association said.
Aircraft or ground base generators are used to deliver the materials into the clouds, he said.
"In Texas, our operations are conducted by seeding at the base of a convective thunderstorm with an aircraft. Our pilots and meteorologists (on the ground) work together via radio contact to identify target clouds and areas of inflow," Jennings said.
"We rely on the inflow to transport our material into the areas of the cloud that the material is expected to impact. The meteorologists are licensed by the state of Texas to perform these operations. The main tools used are satellite imagery and radar via a program called TITAN (Thunderstorm Identification, Tracking, Analysis and Nowcasting) supported by the National Center for Atmospheric Research."
Safeguards are in place to curtail or stop cloud-seeding programs on predetermined criteria.
"For example, on our program in North Dakota we do not seed storms that are producing a funnel cloud or tornado, and we also suspend operations during flash flooding situations. Winter programs generally have snowpack criteria by which seeding may be suspended, based on the percentage of normal precipitation and how far along they are in the snow season," said Darin Langerud, director of the North Dakota Atmospheric Resource Board, who is part of the North American Weather Modification Council.
Cloud seeding produces no significant environmental effacers but does enhance precipitation by 5 to 15 percent and can reduce crop-hail damage by 40 to 45 percent, Langerud said.
"The economic benefits of increasing precipitation and reducing hail damage are too numerous to list, but in general, the benefits of extra water in the form of rain and snow and reduced crop-hail damage produced from cloud seeding far outweigh the costs," he said. "Water produced from cloud seeding can cost as little as a few dollars per acre-foot. Desalination, for example, produces an acre-foot of water for roughly between $500 to $2,000 per acre-foot."
Besides the United States, forty-two other nations have weather modification programs, according to a report released in July by the Expert Team on Weather Modification Research of the World Meteorological Organization.
Weather warfare is banned under a 1980 treaty to which the U.S. is a signatory, but the U.S. intelligence community definitely has an interest in such technologies, said John E. Pike, director of GlobalSecurity.org, a security think tank in Alexandria, Va.
"Because global warming may impact the security of other countries and create problems for the U.S. government," Pike said. One national security benefit would be to prevent state failure in Africa, particularly in a nation such as Somalia, which has suffered through famine and a long-term civil war.
It also would be perfectly ethical for the U.S. government to use weather modification to save lives and money, Pile said.
The U.S. study is expected to be finished in the fall of 2014.