The Cult of Global Warming is Grasping at Straws 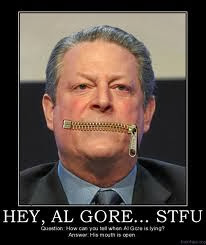 The Climate Change alarmists are clamoring to blame the recent cold snap on anthropogenic global warming. And, really, what choice do they have? When record cold temperatures are freezing Niagara Falls, and plunging the American Midwest into an ice age, jokes about Al-Gore sycophants are hard to avoid. In righteous defiance to reality based observations regarding the environment, the far left has unveiled a theory that America’s recent brush with winter weather is actually an experience of anthropogenic global warming.
Or, as Ezra Klein put it:

Well… I guess to an extent, the Washington Post’s in-house manbearpig alarmist is kinda right. One worldwide cold spell does not unequivocally disprove the existence of man-made global warming. But it certainly does call into question the credibility of the experts who suggested such cold was a fading thing of the past.

No. The “polar vortex” does not disprove climate change. (Of course, it doesn’t need to. Global warming theories have mostly disproven themselves.) But it does prove how wrong the “experts” have been on global warming science. Despite the alarmists’ waxing poetic about climatological Armageddon, almost 98 percent of their predictions have proven to be false.

Remember when alarmists were predicting the end of winter as we know it? There was even talk about global cooling in the 1970’s. In the late 1990’s, Al Gore predicted we had roughly ten years left before global temperatures melted ice caps, and submerged major coastal communities. The UN even predicted in 2005 that there would be over 50 million “refugees” from communities deemed
“uninhabitable” by global climate change. Back in 2012 the New York Times predicted the demise of the ski industry as global warming eradicated the sport from the face of the (increasingly hot) planet. And in 2013 a global warming research crew found themselves stuck in the Antarctic ice they set out to prove had been melting.

And now, according to the very same UN that predicted doom by the year 2010, we have been in a 15 year “holding pattern” that has seen no significant increase in global temperatures. (Despite the fact that “greenhouse gases” have continued to increase.)

But, when global warming becomes difficult to sell (because the average person sees a snow-plow clearing the streets on a below-zero evening) the leftists do what they do best… They begin to spin.
“This weather is unprecedented!” they scream. Of course a little bit of research, again, puts a muzzle on their alarmism. While left-wing bloggers might be prepared to showcase a frozen Niagara Falls as proof of “extreme” weather patterns, similar photos from the 1890’s, 1910’s and 1930’s dull their argument of extremism.

In the end, the largest problem Al Gore cheerleaders have is their devotion to politics over science. The science that has perpetuated the global warming myth is little more than a “junk” science. And that’s not an editorial on the content, theories, hypothesis, or politically corrupt culture of the grant-gobbling academic hacks who call themselves scientists. (Although, it could be.) That statement is an unbiased and scientific view of Global-warming-science methodology.

Remember those science books in the 9th grade that taught students about the scientific model? Remember the process: Form a hypothesis. Test the hypothesis. Draft a conclusion.

Global-warming-science is working backward. They wrote up a hypothesis, which was immediately proven wrong… (In the 1970’s they predicted an ice age. In the 1980’s they predicted clean air shortages, and “peak oil”. In the 1990’s they hitched their politically driven wagons to the theory of global warming.) So rather than alter their hypothesis (which is what scientists are supposed to do when their theories are proven wrong through fact gathering) they decided to begin working in reverse.

The conclusion, that anthropogenic global warming exists and is causing imminent climatological doom, has been drafted. And all facts, experiences, and studies are therefore proof of an unprovable declarative theory. Anyone who disagrees with them is a “denier.” Belief in anthropogenic global warming is, apparently, more of a religion than a science.

And like a Mayan Priest that claims the sudden drought is the wrath of a god, climate alarmists claim the sudden cold is the result of your non-hybrid SUV. Sacrifice a few trillion dollars (rather than a virgin) and the angry climate gods will soon return normalcy to your seasonal weather schedule…
The fact is, skeptics of global warming are not “deniers”. At least, I’m not. I’m a thinker. And I tend to think someone has no idea what they’re talking about when they sail their ship into an ice-locked portion of the arctic while looking for signs that the polar icecaps are melting… Such moves just don’t scream out for confidence.

Oh, and I have my doubts about manbearpig as well