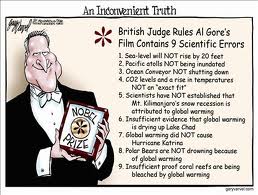 Top climate scientists have admitted that their global warming forecasts are wrong and world is not heating at the rate they claimed it was in a key report.

The IPCC maintain that they are 95 per cent certain that global warming is caused by humans Photo: Reuters

A leaked draft of a report by the UN Intergovernmental Panel on Climate Change is understood to concede that the computer predictions for global warming and the effects of carbon emissions have been proved to be inaccurate.
The report, to be published later this month, is a six year assessment which is seen as the gospel of climate science and is cited to justify fuel taxes and subsidies for renewable energy.
The “summary for policymakers” of the report, seen by the Mail on Sunday, states that the world is warming at a rate of 0.12C per decade since 1951, compared to a prediction of 0.13C per decade in their last assessment published in 2007.
Other admission in the latest document include that forecast computers may not have taken enough notice of natural variability in the climate, therefore exaggerating the effect of increased carbon emissions on world temperatures.
The governments which fund the IPCC have tabled 1,800 questions in relation to the report.

One of the central issues is believed to be why the IPCC failed to account for the “pause” in global warming, which they admit that they did not predict in their computer models. Since 1997, world average temperatures have not shown any statistically significant increase.
The summary also shows that scientist have now discovered that between 950 and 1250 AD, before the Industrial Revolution, parts of the world were as warm for decades at a time as they are now.
Despite a 2012 draft stating that the world is at it’s warmest for 1,300 years, the latest document states: “'Surface temperature reconstructions show multi-decadal intervals during the Medieval Climate Anomaly (950-1250) that were in some regions as warm as in the late 20th Century.”
The 2007 report included predictions of a decline in Antarctic sea ice, but the latest document does not explain why this year it is at a record high.
The 2013 report states: “'Most models simulate a small decreasing trend in Antarctic sea ice extent, in contrast to the small increasing trend in observations ...
“There is low confidence in the scientific understanding of the small observed increase in Antarctic sea ice extent.'
The 2007 forecast for more intense hurricanes has also been ignored in the new document after this year was one of the quietest hurricane seasons in history.
One of the report's authors, Professor Myles Allen, the director of Oxford University's Climate Research Network, has said that people should not look to the IPCC for a “bible” on climate change.
Professor Allen, who admits “we need to look very carefully about what the IPCC does in future”, said that he could not comment on the report as it was still considered to be in its draft stages.
However, he added: “It is a complete fantasy to think that you can compile an infallible or approximately infallible report, that is just not how science works.
“It is not a bible, it is a scientific review, an assessment of the literature. Frankly both sides are seriously confused on how science works - the critics of the IPCC and the environmentalists who credit the IPCC as if it is the gospel."
Scientist were constantly revising their research to account for new data, he said.
Despite the uncertainties and contradictions, the IPCC insists that it is more confident than ever – 95 per cent certain - that global warming is mainly human’s fault.
Next week 40 of the 250 authors who contributed to the report and representatives of most of the 195 governments that fund the IPCC will hold a meeting in Stockholm to discuss the finding to discuss any issues ahead of the publication. The body has insisted that this is not a crisis meeting but a pre-planned discussion.