President’s long-held view that science and the law can be finessed, where necessary, to suit policy ends Science for the Picking 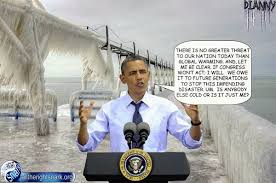 In a May commencement speech delivered at the University of California, Irvine, President Obama mocked members of the U.S. Congress who ‘duck the question,’ as he put it, “of whether climate change is real by saying that they are not scientists”. Since then, articles appearing in a number of “neutral” media outlets, including theWashington Post, New York Times, Los Angeles Times, Miami Herald, San Francisco Chronicle, Cape Cod Times, Huffington Post, etc., have endorsed this learned approach of addressing the issue of climate change. Clearly, they display climate change believers’ chosen tactic of ridiculing or dismissing as climate change deniers anyone, including scientists, analysts and politicians, who dares to raise questions about the views of many within the contemporary climate science community.


Perhaps a more thoughtful way to address this matter would be to question the President and his Chief Science Adviser, John Holdren concerning which paradigm of science they subscribe to. Is it the evolved modern notion of quantitative science built on the firm empirical principles of Newtonian physics or is it a new postmodern brand of qualitative science incorporating precautionary and other subjective concepts—all infused with a certain sense of intellectual ascendency.

If they subscribe to Enlightenment-era science, they should legitimately ask whether the myriad scientific uncertainties discussed in the Intergovernmental Panel on Climate Change (IPCC) assessment reports, and by extension, the administration’s national climate assessments, provide reason to question whether science has clearly identified the necessary causal links definitively establishing that humankind’s activities are primarily, if not exclusively, responsible for all or most current global warming—both observed prior and future computer modeled global warming.

If however, they subscribe to what ‘futurist’ Jeremy Rifkin describes as “a radical new approach to science and technology based on the principle of sustainable development and global stewardship of the Earth’s environment” premised on “[t]he precautionary principle, [which] is designed to allow government authorities to respond pre-emptively, as well as after damage is inflicted, with a lower threshold of scientific certainty than has been the rule of thumb in the past,” they are likely to interpret the uncertainties reflected in the IPCC and administration-developed climate science assessments differently. It would certainly explain why the President has argued that immediate regulatory actions are necessary, notwithstanding the current costs, because thepossible future endangerment to human health, the environment and the economy posed by inaction is unacceptable.

Consistent with the President’s pledge of “unparalleled transparency”, Mr. Holdren’s response would be illuminating. He would likely confirm the White House has, by design or happenstance, helped facilitate a subtle but nonetheless substantive change in the way Americans define, understand and apply principles of science to address perceived environmental and health risks. If by design, it would reveal a non-transparent, activist-inspired agenda of shifting America away from the Enlightenment era paradigm of science premised on probability, risk assessment, prevention, causation and ‘hard’ quantitative evidence of foreseeable harm toward the postmodern anti-Enlightenment era paradigm of science based on possibility, hazard assessment, precaution, correlation, coincidence and ‘soft’ qualitative evidence of possible and unforeseeable harm.
As the European experience demonstrates, the legal and economic consequences flowing from such a paradigm shift are real and present their own significant dangers. This new postmodern regulatory science paradigm relies more on politics and notions of policy-based science informed by environmental and social justice concerns rather than on science-based policy.
As a second question, one would ask how this shift is coming about. Mr. Holdren’s response would likely be more complex and nuanced. There are multiple mechanisms at play, ranging from moral suasion to fear mongering to nudged behavior modificationto weakened scientific peer review processes.

In an ideal world, Mr. Holdren and other Administration officials would acknowledge the Environmental Protection Agency (EPA) and the National Oceanic and Atmospheric Administration (NOAA) have done a less than stellar job of conducting proper and robust peer review of the climate science underlying EPA’s 2009 greenhouse gas endangerment findings. But we do not live in such a world. Indeed, they seem to have forgotten or conveniently explained away their obligation under the federal Information Quality Act to ensure each of the 28 highly influential scientific assessments summarizing and synthesizing IPCC ‘climate science’ supporting those findings had been adequately validated. This would not have been an insignificant undertaking yet it was required to detect serious systemic violations of the letter and spirit of the Act and is a serious omission.

Overwhelming evidence produced by the nonprofit Institute for Trade, Standards and Sustainable Development (ITSSD) demonstrates how EPA and NOAA, under Mr. Holdren’s stewardship of the White House Office of Science and Technology Policy-led interagency US Global Change Research Program, systematically circumvented the Information Quality Act’s most rigorous and least discretionary peer review, objectivity/bias, transparency and conflict-of-interest standards. Such evidence is contained in a recast 145-page annotated FOIA request ITSSD filed with EPA on June 30, 2014, and in a clarified FOIA request ITSSD filed with NOAA in May 2014.

As InsideEPA reported, the new EPA FOIA request seeks disclosure of “documents reflecting four different levels at which EPA should have followed IQA requirements”. By comparison, the EPA Office of Inspector General’s 2011 investigation of agency GHG endangerment finding data quality processes had been limited to only one of these levels. And as we previously reported in the Washington Times, the clarified NOAA FOIA request described how the National Research Council of the National Academies of Science had hand-selected scientists affiliated with universities receiving NOAA climate research grant monies to peer review six NOAA-developed climate assessments, presenting a significant appearance, if not actual conflict-of-interest in violation of the IQA.

ITSSD’s findings and analysis demonstrate that EPA’s decision to circumvent the requirements of the Information Quality Act likely originated from within and beyond the agency itself. While the full breadth of EPA’s actions date back to before the beginning of the Obama Administration, a 1989 law review article written by Harvard Law School Professor Laurence Tribe with the assistance of the then editor-in-chief of the Harvard Law Review, B. Obama (“Curvature of Constitutional Space”) provides a window into the President’s views on the future of public policy and science. It reveals the President’s long-held skepticism about the intersection of science and the law especially where matters of environmental and social justice are concerned. It also sheds light on the President’s long-held view that science and the law can be finessed, where necessary, to suit policy ends.

We arrive, then, at a point where ends seem to justify means, fair and transparent processes fall by the wayside, and critics become villains. Partisans lob amusing but ultimately unsatisfying barbs at each other while the rules of science shift behind the curtain. Given the global economic and environmental challenges faced by our nation, we should expect and demand better.