The global warming fear mongers are at it again. 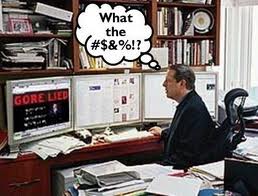 Twice recently they’ve been caught in the act-- not only are they lying, they're so desperate that they're starting to look ridiculous.
“Three years of observations show that the Antarctic ice sheet is now losing 159 billion tonnes of ice each year,” reports the UK’s University of Leeds, “twice as much as when it was last surveyed. A team of scientists from the UK Centre for Polar Observation and Modelling, led by researchers at the University of Leeds, have produced the first complete assessment of Antarctic ice sheet elevation change.”
Like you, I'm suspicious of any group of scientists that live in a “kingdom” that can’t even practice general dentistry correctly.
Or healthcare.
Or, apparently, math.
The press release goes on to say that the ice melt could contribute to an increase in “global sea levels by 0.45 millimetres each year alone.”
That's really not that impressive a figure when you understand that means about a 2 inch rise over 100 years. But what's really impressive about the figure is that it's just not true.
From WattsUpwithThat:
Sanity Check:
From Climatesanity: Conversion factors for ice and water mass and volume
If one cubic kilometer of water (i.e., one gigatonne of water) is spread evenly over the entire 361 million square kilomters, the thickness of the new layer of water will be given by:
1 km³ / 361 x 106 km²= 2.78 x 10-6 meters= 2.78 microns.
Or, in terms of gigatonnes:
1 Gtx(1 km³/Gt)/ 361 x 106 km²= 2.78 x 10-6 meters= 2.78 microns / Gt
That is, one cubic kilometer of water (i.e., one gigatonne of water) will add less than 3 millionths of a meter to the oceans!
From the press release, we are seeing about 159 billion tons/year of ice converted to meltwater (unless it sublimates), so the effect on sea level would be 159/1000 or 0.159 x 3 millionths of a meter, or 0.477 millionths of meter of sea level rise per year from this.
I'll leave it to the highly trained scientist at the University of Leeds to convert the millionths of a meter into inches for you. But it's my strong recommendation you not allow them to do your taxes.
But hold on there partners, we’re not done yet.
At we can at least agree, as we've been told for years, that 97% of climate scientists agree that global warming is caused by man.
Right? I mean that’s indisputable.
The University of Queensland told us so in a report penned by John Cook.
In addition to being indisputable, it has also been one of the bully points the global warming alarmists have used to shout down opponents as too stupid to understand science.
But as we know from previous global warming snafus, the interpretation of reports can be as changeable as the weather.
Hahaha! Weather? Get it?
“The University of Queensland in Australia is taking legal action to block the release of data used by one of its scientists to come up with the oft-quoted statistic that 97 percent of climate scientists agree that mankind is causing global warming,” reports the Daily Caller.
It seems a blogger has gotten hold of the primary data used in the research, and the data suggests that far from having a consensus that global warming is man-made, scientists are still skeptical.
This is not the first time that critics have questioned the results of that study.
A catalog of studies in a report published by Science & Education, shows that a little more than one quarter of 1% of all studies conclude that global warming is man-made, says the Daily Caller.
“In fact, Cook’s paper provides the clearest available statistical evidence that there is scarcely any explicit support among scientists for the consensus that the IPCC, politicians, bureaucrats, academics and the media have so long and so falsely proclaimed,” says statistician Dr William Briggs in a press release accompanying the report. “That was not the outcome Cook had hoped for, and it was not the outcome he had stated in his paper, but it was the outcome he had really found.”
And here's what I know about people who lie: they are liars.
Some people lie for profit, some people lie for power, and some people just lie for the fun of it.
I suspect in the global warming crowd there's a small group of people who are liars, with the large admixture of people who are just believers.
But amongst believers in history, even Thomas had doubts.
It is up to the faithful, the believers, the ideologues, to cast out the liars.
The people who should be offended by these ploys, stratagems, and sophistications are those who believe deeply in the science of global warming.
But until they cast out the liars, their faith counts for nothing.
It is after all, just another lie.